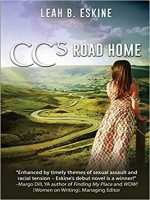 CC feels this veil of shame as she worries about school, about friends, and about her unhappy mother. CC struggles with her problem while trying to adjust to her grandparents' well-meaning gentle authority. CC is angry and feels unwanted by her mother, detests her mother's boyfriend, is reluctant to accept her grandparents' love, and hesitant to make friends. She feels controlled. "What's the matter with me? I feel like I don't fit in anywhere." She is defiant and angry with the world. Readers can easily relate to her feelings of being trapped and cornered. It's a realistic glimpse into an era when sex education and birth control were mostly unavailable.

CC is drawn to her Uncle Bud, an adult who has a brain injury due to an accident and dependent on her grandparents for his care. His simplistic understanding of the world around him is a welcome counterbalance to the chaos in CC's world.

The world CC lived in was dominated by civil rights activities and racial misunderstanding. CC's school in New Orleans was integrated, and she develops a close relationship with a young African American boy with whom she became intimate. However, it is a relationship that cannot continue. In fact, at that time in American history, couples of different races could not marry.

Living on her grandparents' farm, CC makes friends with a young girl named Addy. They volunteer to help teach young Black children to read, which further educates CC of the race barriers faced by African Americans.

More than a coming of age story, this narrative is the tale of how young women were victims of an American society that all but ensured teenage girls would have no recourse once pregnant other than to sign away their baby for adoption. At their most vulnerable, these teen girls were whisked away to have their babies in secret and forced to surrender their rights as mothers.

Eskine adds a heartwarming conclusion to this bleak tale that explores CC's shame, embarrassment, and the psychological/emotional responses she experiences in her life-changing situation. The seriousness of CC's life story is undoubtedly an educational narrative for young girls.  CC's Road Home illuminates the veil of shame, so many teens of the sixties struggled with and continued to haunt them even as adults.