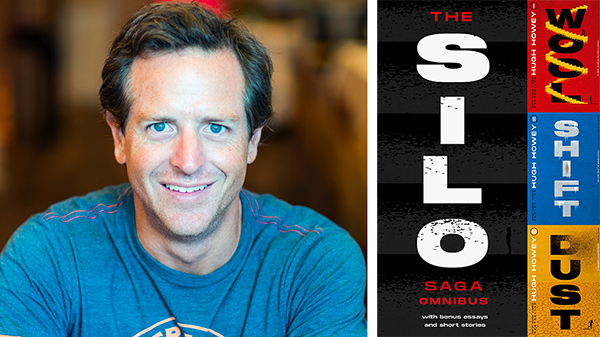 It’s not the first time that Howey has had his work published traditionally. Simon & Schuster published Wool in 2013, and Houghton Mifflin Harcourt published Shift, Dust, and several others in 2016. But the new publishing program means that, for the first time, the complete Silo series will be available to all retailers in print and electronic formats from a single mainstream publisher.

Despite his frequent forays into traditional publishing, Howey’s reputation for uplifting and collaborating with fellow indie authors is unparalleled. Fred-ric Shernoff, author of the Atlantic Island series, contributed to 2014’s Wool Gather-
ing, an indie anthology of stories based on the Silo books. “Not only did Hugh graciously allow me to write in his Wool universe but he actively supported my work,” Shernoff says. “His efforts helped remove the stigma around self-publishing and changed the game for so many aspiring authors.”

Howey recently spoke with BookLife about his success as an author, reaching readers through indie and traditional publishing platforms, and plans for a TV adaptation of the Silo Saga.

Can you talk about your evolution as a writer?

By the time I was 12, my goal in life was to write a novel. I used to sit at my dad’s Apple IIe and write chapters of stories that I’d never finish. This became my pattern for the next 20 years. I’d get an amazing idea for a novel, sit down and write a few chapters, get bored or stop believing in myself, and I’d give up. By the time I was in my 30s, I was convinced that I’d never write a book at any point in my life.

It’s hard to say what got me over the hump, exactly. I think it was the story that sucked me in, the characters that appeared on the page. Suddenly, I wasn’t really writing so much as reading what I was writing.

Did you find a readership for Wool right away?

The Wool novelette was the seventh thing I published. At that point, I had a few hundred devoted readers, and I was making a couple hundred bucks a month, which paid a few bills and felt like a success. My readership was slowly growing. But Wool took off like a rocket. Zero promotion, barely even a social media mention, and it kept gaining attention from word of mouth and reader reviews. I stopped what I was writing and continued the story.

What made you decide to now publish the entire Silo Saga traditionally?

I’ve always been open to every method of publishing. The terms of the contract just needed to make sense. There aren’t a lot of publishers willing to do interesting deals. Ten years ago, publishers chased after Wool. I was less interested in the money and more interested in doing print-only deals and deals that had a limited term of license. Things have changed, which is why I’m glad I never sold lifetime rights to anyone. I’ve found an amazing partner in Houghton Mifflin Harcourt. It was a no-brainer to do a new deal with them.

What are your hopes in terms of reaching an even broader audience through your new publishing platform?

Early on, I based my publishing decisions primarily on maximizing my income so I could afford to keep writing. The best financial decision has almost always been to self-publish. Now that I’m financially secure, I can choose to publish in ways that still make financial sense but that offer advantages in reaching new readers. The relaunch with Houghton Mifflin Harcourt should capture the attention of readers who have never heard of this series. Hopefully these readers can get some hipster cred and enjoy the books before any adaptations come out.

Can you reveal anything about the TV series in development?

The writing is well underway, and everything written so far is absolutely mind-blowing. TV will allow us to show events missing from the books, so we get to expand the story rather than truncate it. There is so much fan service in these episodes, but we’re also telling a story that will hook viewers who aren’t familiar with the books. It’s the best of all possible worlds.

Do you anticipate continuing to publish your future books independently?

I’m not sure how I’ll publish my next novel. The joy of self-publishing is that there’s little delay between a finished product and reaching readers. And, as Wool has shown, just because you publish a book on your own doesn’t mean it can’t find a publishing partner later on. The one thing I’ve learned in this business is to think about the reader first and foremost. If you do that, everything else is more likely to fall into place.

A version of this article appeared in the 11/23/2020 issue of Publishers Weekly under the headline: “The Best of All Possible Worlds”